Ivanhoe Harriers Athletic Club is saddened by the passing of our esteemed Life Member. Dedicated to athletics, loyal to his Club and life Member of Athletics Victoria.
Deepest sympathy to the family.

Round 3 of AV Shield to be held at Frankston has been cancelled due to the extreme wet weather. It is yet to be determined if or when the round will be rescheduled.

As the new season approaches, a timely reminder for all past members to renew their membership. We already have a good group of junior athletes joining for the first time and need to see continued growth across the Club. Support from previous senior members is very important in assisting and encouraging our new group of promising juniors as they find their way in their first season.

So don't delay... lodge your renewal as soon as possible.

Follow these links for more Dates and the Venue locations 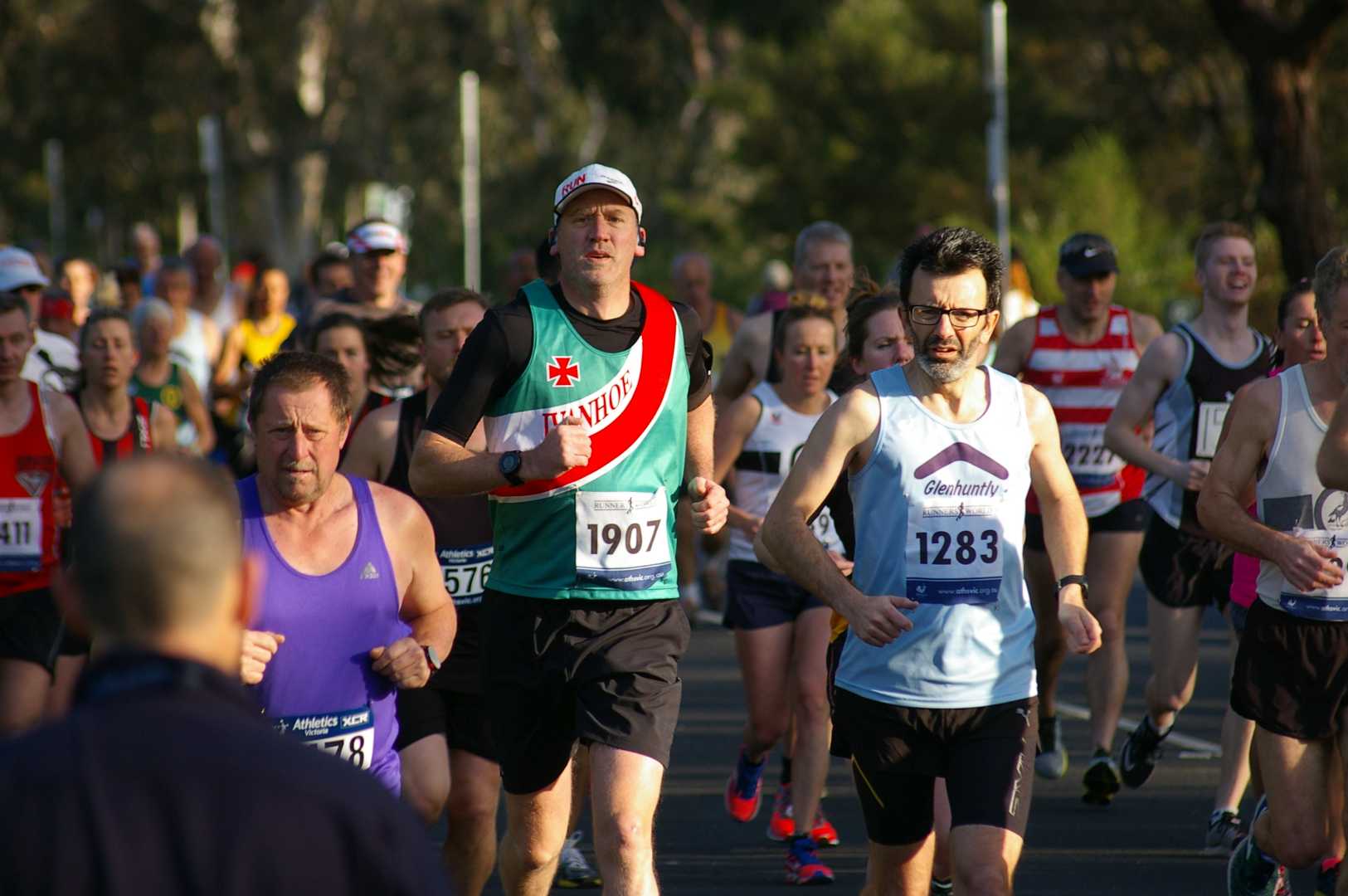 This was a tough but very scenic run along the banks of the Yarra. There was a huge field as this event has a reputation of being the fastest half marathon in Australia, and some athletes and invitation runners use this as a test for the Melbourne Marathon.

Unfortunately we didn't have a full team for this round but did have three brave athletes who completed the 21.1km course.

James Lynch has a good time of 1.37 and Travis & John were under 2 hours without working too hard which was good.

This was the last round of the Winter season and it was good to be back at the Tan were the atmosphere is always great. Our team came 12th out of 15 competing teams which was respectable.

Phil used this as a warm up for the Summer season, and it was good to have David Burke in the Cross Country team again instead of always putting his hand up for club duties.

Thanks to Simone, Chris & John (David family) for completing the AV duties on behalf of our club. 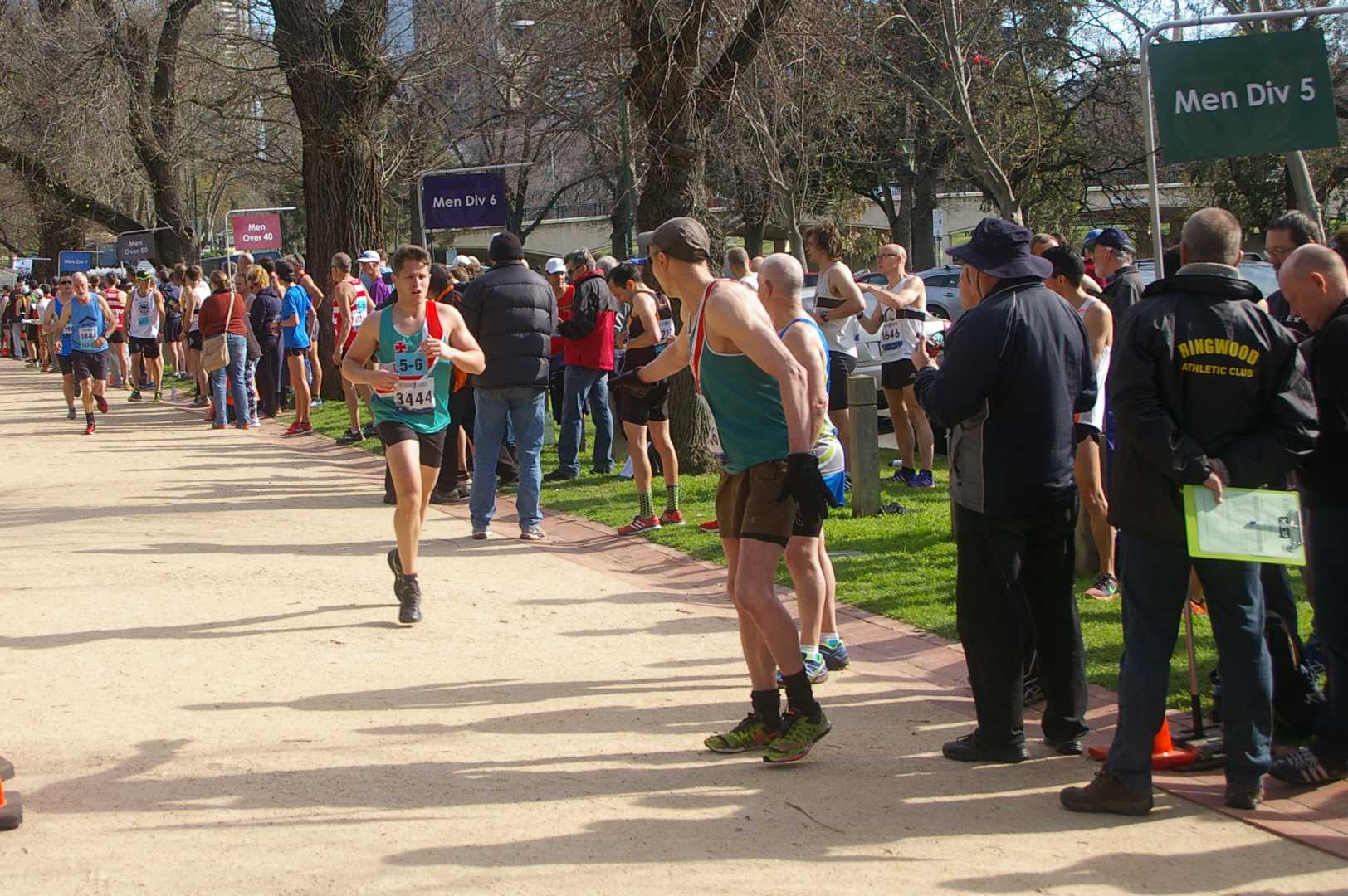 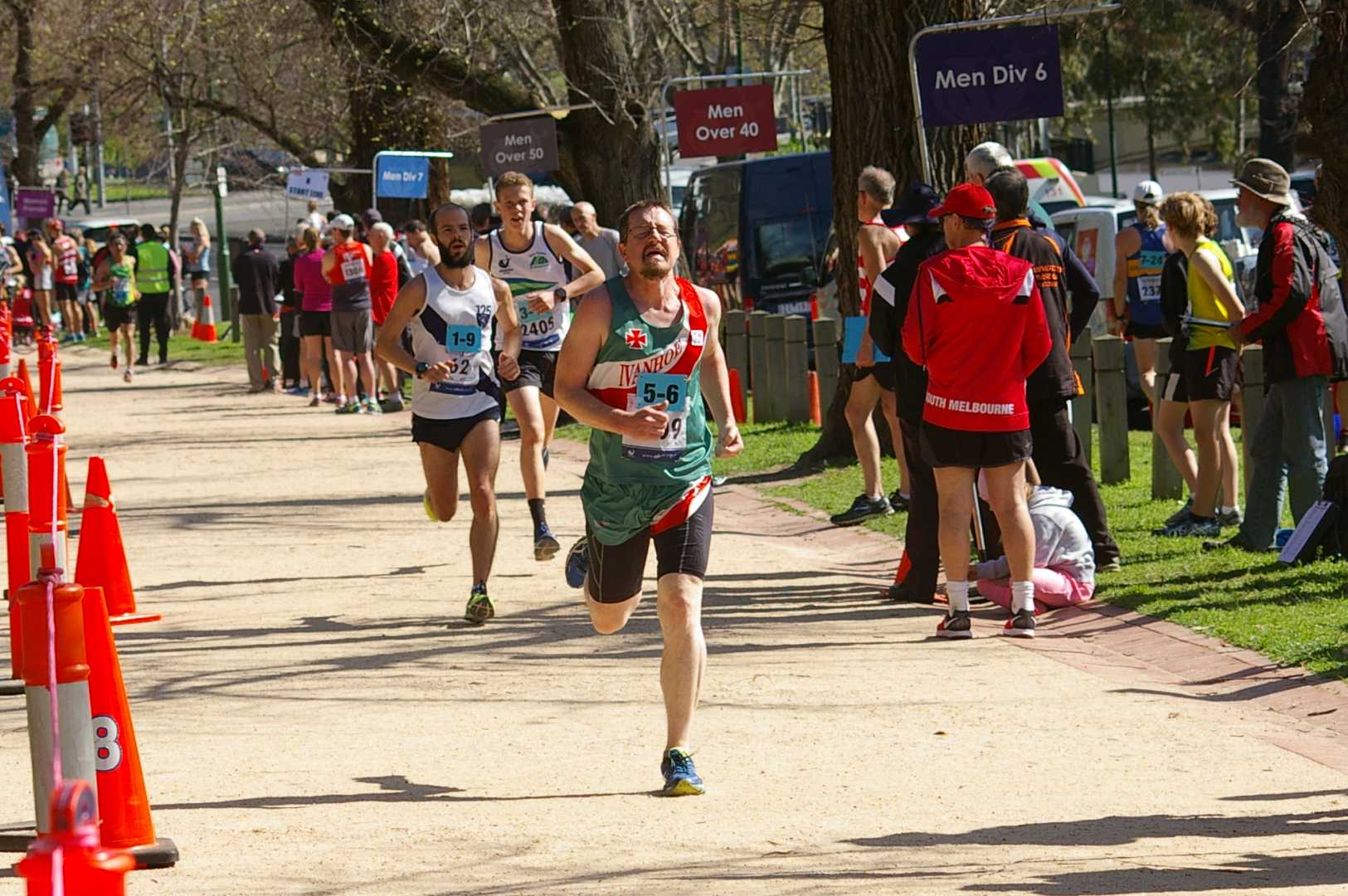 We finished 12th out of 16 competing teams.
A little disappointing, however not having a full team for rounds 3, 7 & 9 obviously had a big impact on our overall score. I am sure that the new talent that we now have from Ivanhoe Grammar School will help to fill our team next year, and maybe even result in multiple teams competing in the future.
The final ladder for our division

Thanks to all of our Winter athletes and volunteers who helped complete our club duties.
It was another enjoyable season with a range of different courses at some great new locations. However what was really great was our close team of athletes that were always willing to try their best whilst proudly displaying our club colors. This was despite sometimes being covered in mud or losing the odd shoe.

Ideal conditions on the day with no wind and some sunny breaks. What a beautiful scenic course which is over some rough terrain near Angelsea beach finishing off on the top of a hill overlooking the beach and then back to the finish line at the Angelsea Caravan Park. Our team completed this relay over a distance of 31.7 km however each leg was extended by 300m due to a track diversion because a section of the course was too dangerous.

James Lynch ran the 10.1km leg with an excellent time of 45.33 which was 7 minutes faster than last year. Travis McIntosh also had an excellent result with a time of 45.26 for his 9.1km leg. Chris Struve ran well for is 8.2km section with a time of 46.01, and John David who unfortunately had a fall half way through his run finished off the relay with a time of 31.09 for the 5.5km leg. Our team did a great job finishing 6th out of 10 teams. Well done to everyone who competed on the day, and also for the supporters (some with 4 legs) who were cheering on our athletes to the finish line.

Calista Castles is a passionate supporter of womens health. She has coached women recovering from serious illness to run in events of varying distances. She also developed and implemented a fitness club at MLC in Kew to encourage teenage girls to be more physically active and is assisting with the coaching of the Ivanhoe Grammar School middle distance team. Calista is a Level 2 Athletics Coach (Middle & Distance running), Yoga Instructor, Pilates Instructor, Level 1 & 2 Boxing Instructor and Level 1 Kettlebells Instructor.

A tough run which is two and a bit laps of Lake Wendoree. I have said this before and it's still true that the laps are so long that things don't seem to move on the other side of the lake when you are running. Not very motivating when you are trying to get to the finish line, however the feeling is fantastic when you actually finish. Results for our team were:

After 4 rounds we are currently 10th on the ladder out of 16 teams. 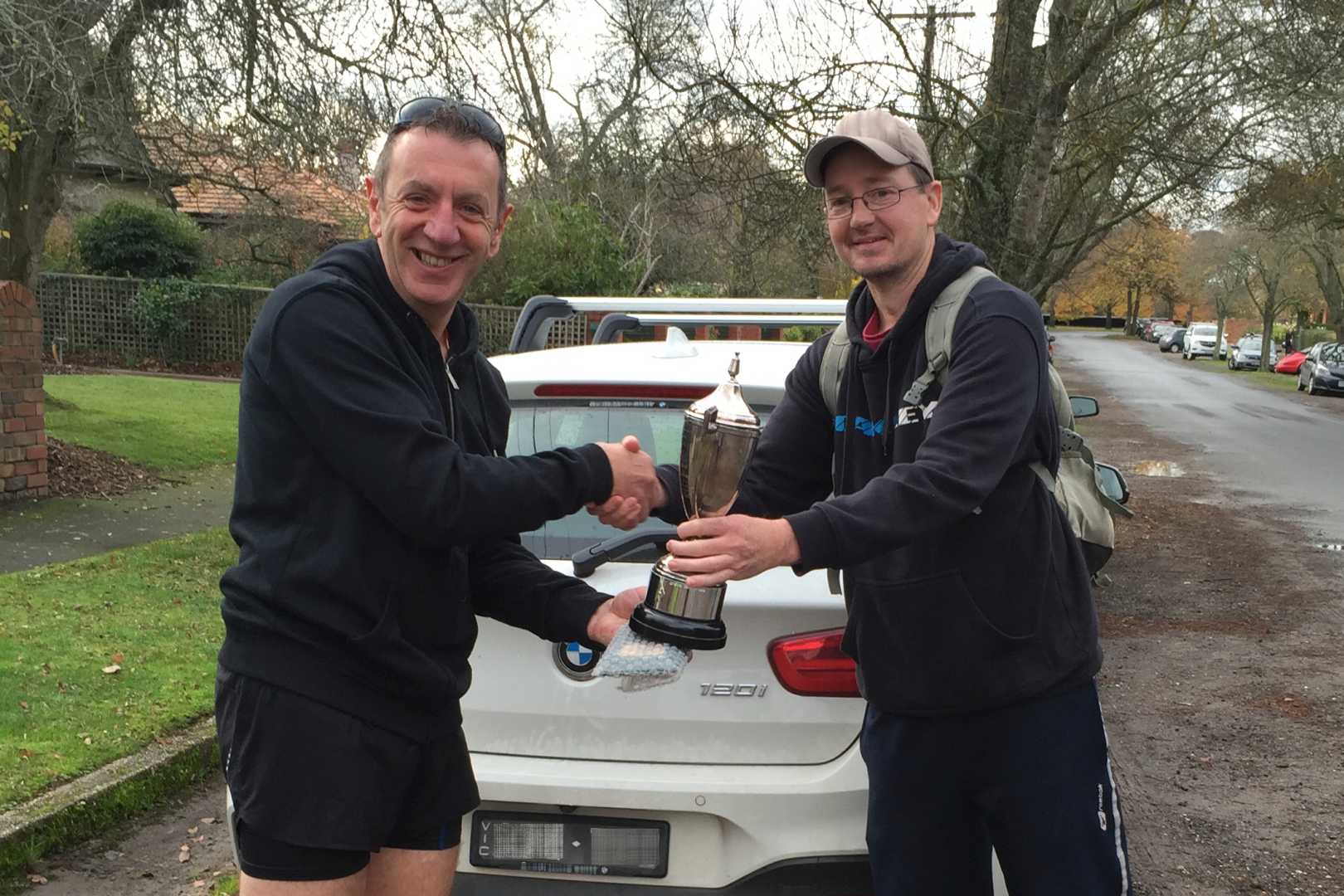 After the race Chris Struve who just returned from a nice holiday in the center of Australia was presented with the Statewide Trophy for the most CC club points for the 2015 season.

Trophies for the season just ended were presented at the Annual General Meeting held on 25th May at the Willinda Park track pavillion.

A full list of trophy winners can be found here.

This was a new race on the calendar for this year replacing Lardner Park. A really tough course with very challenging hills. However the scenery was spectacular. Another successful run for James Lynch with a time of 38.09. Travis McIntosh was in the middle again with a time of 46.07 followed by John David (52.32) & David Burke (53.11).
Simone David successfully finished the Women's 6 km race and had a good time of 38.21 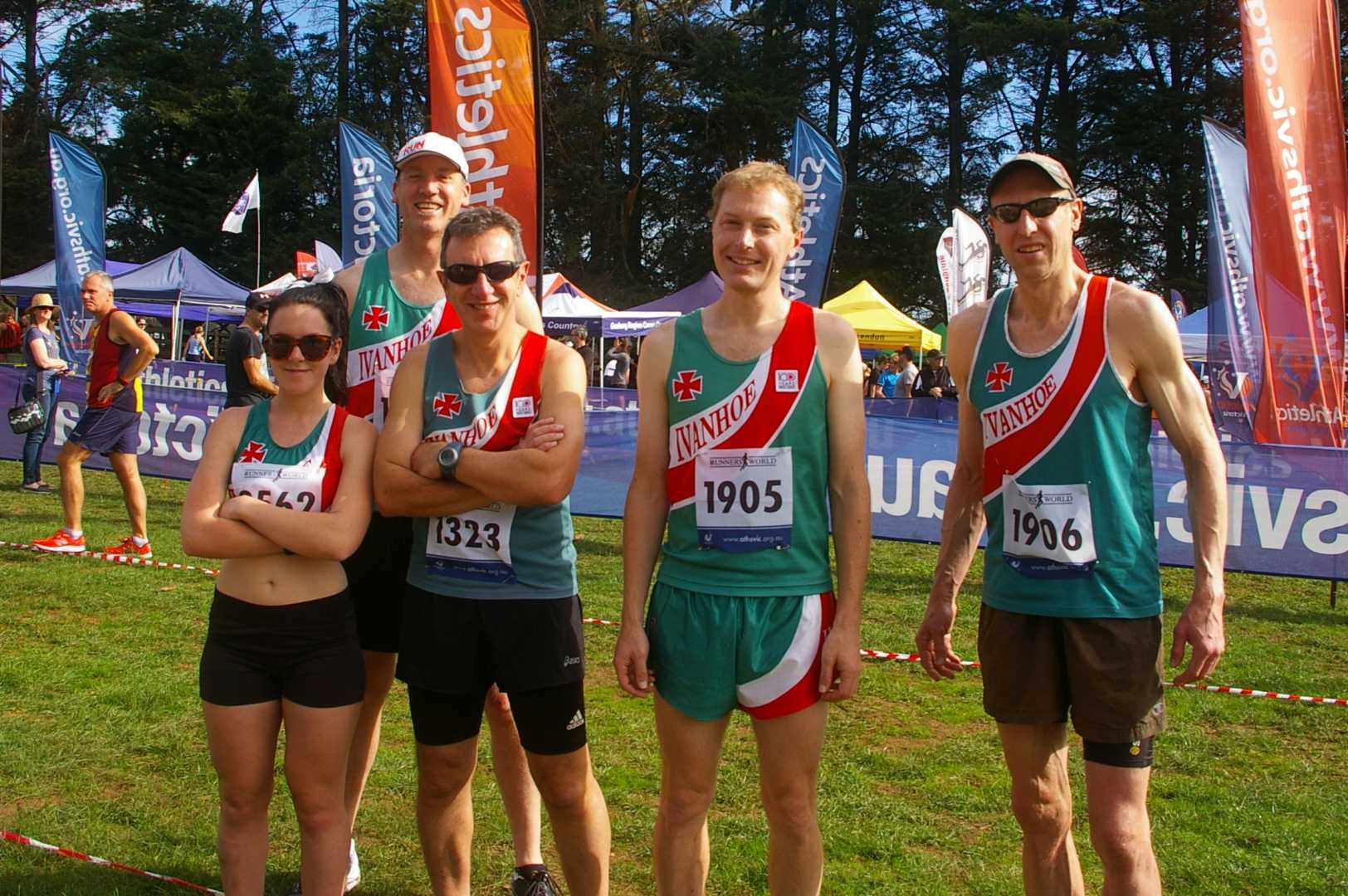 Another new race which replaced the grueling Brimbank Park run. What a fantastic picturesque course on the property that Dame Elisabeth Murdoch was raised.
Unfortunately we only had 3 runners for this event so didn't obtain team points. Times for the race for our club were:

Ivanhoe Harriers Athletic Club will be holding an Annual General Meeting, incorporating the 2015/2016 winter and summer season's presentation night on:

All Ivanhoe Harriers members, families and friends are invited to attend.
Food and soft drink will be provided, BYO beer & wine. 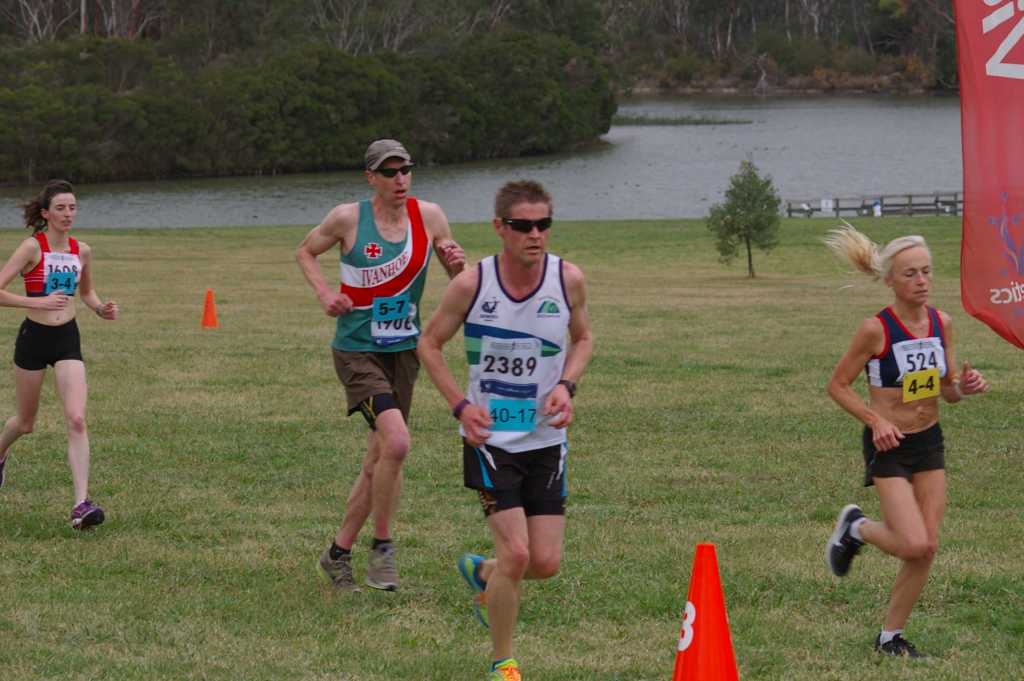 The season started with a fast challenging relay involving two laps of a 3km hilly course through a nice pine forest and open grassland. Our Men's Division 5 team for this race was James Lynch who had a great time of 24.16. Travis Macintosh also did well– 28.48. Simon Rigoni (31.00) & Chris Struve (31.03) finished the relay for the team with a successful finish. Our club came 10th out of 13 teams. Thanks to our club officials who helped to fulfill our club duties for this event being Jill Wallis, Jeff Franklin & David Burke. 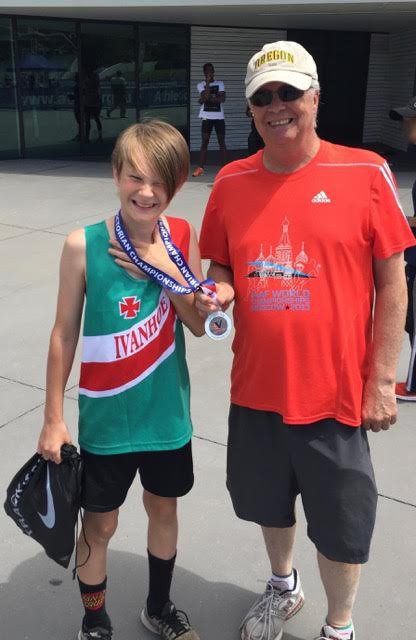 The Club congratulates two of our young athletes for their excellent performances during the Junior Championships.

Finn Heikkila shown with coach Peter Rule is showing a lot of promise with Pole Vault.
Finn won silver in the Under 14 Pole Vault with a clearance of 2.10m, well done Finn!

Rhys Rigoni, also coached by Peter Rule, is a standout multi-event athlete who continues to improve and shows great maturity for his young age. Rhys is shown below competing in the high jump, one of 6 events that he contested at Under 16 level. His Dad Simon advised that 5 of his 6 event results were PB's which shows that Rhys is a certainly a big occasion performer. 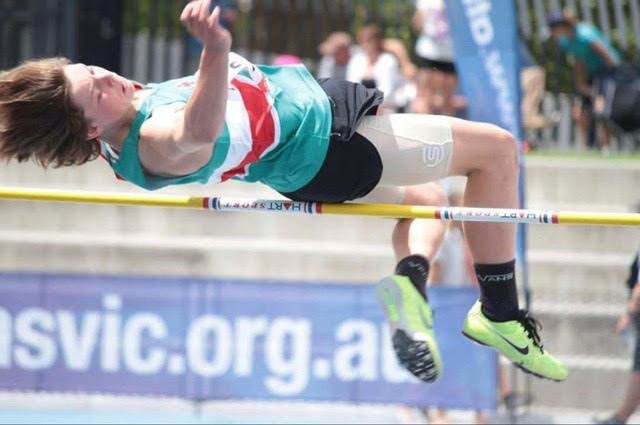 Congratulations from everyone at the Club Rhys!

Sadly we advise of the passing of Anne, devoted and loving wife of Peter and mother of Pete and Fiona. Anne is remembered by many at the Club as a vibrant and active supporter over many years with a great personality and ability to get things done. Anne assisted the Secretary with Cursus and printing annual reports, always ready to help whatever the task. Though she was not well at the time, Anne showed her determination by attending our Centenary Dinner to see son Pete awarded with his selection in our Team of the Century for 400 metre hurdles. This must have been a very proud moment for Anne. Anne showed great courage over recent years and was a very much admired and loyal member of our Club Family.

Our sincere condolences to Peter, Pete and Fiona.

On Sunday, 10th January 2016 ten loyal club supporters gave of their time to help run the sausage sizzle at Bunnings in Preston.
Matt Hall was the principal organiser and he did a fine job for the Club.
The other enthusiastic members were David Burke, John Edney, Andrew Edney, James Lynch, Richard Russell, Michael Wallis and Jeff Franklin, with a special mention for Tom and Margaret Hancock. Tom arrived in his Club Uniform and Margaret quickly took charge of that lovely job of peeling the onions! What a notable effort.
With ten volunteers the jobs were easily shared around, Senior Chefs in charge of the cooking were Michael Wallis, Andrew Edney and Richard Russell who all made sure that the sausages were perfectly cooked... so much so that many of our customers came back for another helping! The weather was good, we managed to cook about 70kg's of sausages and achieve a nice profit for the Club coffers which will help with our future funding obligations. 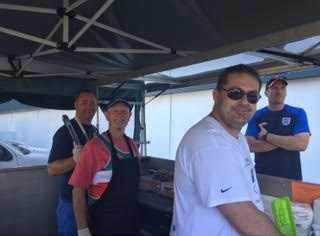 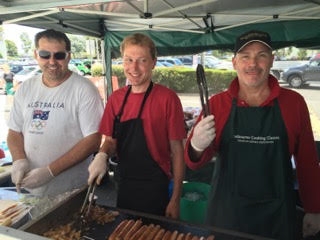